The History Of Music Technology » 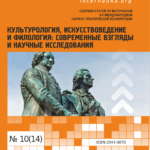 Abstract: The article outlines the views of the Canadian pianist Glenn Gould (1932-1982) on the role of sound recording in the creative process, formed as a result of his artistic practice.

Prepared for publication in the collected papers of the XVI international scientific and practical conference “Cultural Studies, Art History and Philology: Contemporary Views and Scientific Research”.

In the second half of the 20th century, art entered a new phase – the technological one. This transition has caused truly tectonic shifts in the process of producing an artistic product and raised several serious questions, the most important of which is the question of the role of technology in the creative process: should technology (including sound recording technology) be considered a purely utilitarian means of fixing an artwork, or is it an integral part of the creative process? END_OF_DOCUMENT_TOKEN_TO_BE_REPLACED

The sound palette of electronic music: a short historical essay

Elena Stepanova
Abstract: The article reviews the main achievements in the field of musical technology that formed the sound palette of popular music in the second half of the XX century. The influence of electronic musical …

Elena Stepanova
Abstract: The article reviews the concept of “progressive music”, emerged in the British musical culture in the second half of the 1960s — the sociological and musical features of this musical style, experiments with …

In April 2016, Jean Michel Jarre released a video clip called “Exit” — a techno electronic track featuring none other than a former CIA employee, Edward Snowden, known for his disclosures of the US intelligence …

Hal Leonard have recently published a book by Alan Parsons, «Art & Science of Sound Recording», which is a companion book to the 3-DVD set of educational videos released a few years ago. The book, …

Video collection from Musikmesse 2012 (for my article which is to be published in “Radio Magazine”, N 7, 2012). Musikmesse – International Trade Fair for Musical Instruments, Sheet Music, Music Production and Music Business Connections, …

Another excerpt from Elena Stepanova’s essay, “Research Methods and Theoretical Perspectives” (2011).
We have turned into a global information society that includes everyone as a fragment of cyberspace. Electronic media and the Internet in particular act …

A fragment of Elena Stepanova’s essay, “Research Methods and Theoretical Perspectives” (2011), written for the theoretical part of her academic research.
Creative media theory is a relatively new discipline that is still in the process …

For over 100 years, music has been recorded on mechanical storage mediums, and for over 100 years such recordings have been plagued by the same problems: wow and flutter. Who isn’t familiar with the wobbling …

The theremin is the most renowned creature of the Russian engineer Leo Theremin. This musical instrument immortalized the name of its deginer. Leo Theremin had both musical and technical education. He invented the theory …

Chronology in the 1000tracks.ru archives

Archival materials – articles, interviews, reviews, workshops (i.e. virtually all materials before 2008) – are posted on www.1000tracks.ru in accordance with the actual release date of the magazine in which they were published. This is …